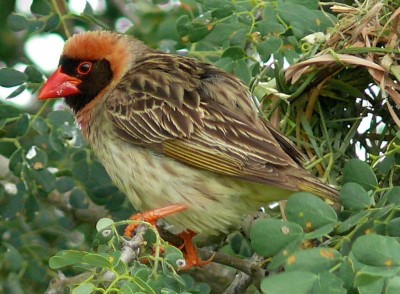 Last month I wrote about some of the seedeaters frequenting the Estate, especially the four species of sparrows. This month I am continuing along this theme with a discussion on the Queleas.

The Red–billed Quelea is a common bird on the Estate though their numbers vary during the year. Since 2012, when monthly records of the birds in the Ambers were initiated, Red-billed Quelea have been recorded in every month. There are however fewer summer records than autumn, winter and spring records. Presently birds may be found in their hundreds and regularly come to bird feeding stations. There are a few breeding records for the Estate where a few dozen birds have bred, it is however not a regular breeding species in the Natal Midlands.

The Red-billed Quelea undertakes extensive local movements in South Africa to areas where they breed. Breeding is localized and erratic and occurs only in years or localities of good rainfall. Breeding usually occurs in vast colonies that may number tens of thousands to millions of birds in the bushveld areas of northern Botswana, Zimbabwe and the Lowveld of Limpopo and Mpumalanga in South Africa. Anyone who has visited Kruger Park during February or March could have encountered one or more of these huge breeding colonies. The colonies attract an assortment of predators to feed on chicks in the nest or those that may have fallen from their flimsy nests. Hyenas, jackal, monitor lizards, snakes and a variety of birds including eagles, storks, herons, etc. may be encountered around the colonies.

Queleas have a very interesting colonial breeding cycle which is highly synchronized and rapidly completed. The nest is similar to that of the Red Bishop but has a knobbly appearance and is usually placed inside a thorn tree. Thousands of nests may be built within a single tree!! Nest building is completed within two to three days of the establishment of the colony and the eggs are laid thereafter in an unlined nest. Incubation lasts 10 to 12 days and the chicks fledge 10 to 13 days later. They spend two or three days in the nest tree before they are able to fly. The colony is abandoned within 40 days of being established. Breeding success is usually high but varies considerably across the species range.

Red-billed Quelea is endemic to Africa and found throughout the continent south of the Sahara excluding the forested areas of central and west Africa. It is considered to be the most abundant bird species in the world with an estimated population of 1,5 billion birds based on the research of Bruggers and Elliott would spend more than 20 years studying this this species in different parts of Africa and its impact on grain crops. Many countries have destroyed tens of millions of Quelea annually in an effort to control their numbers with little impact on the total population. However, the impact on non-target species may have been considerable. Immense flocks stretching over hundreds of meters can sometimes be observed appearing as a smoke cloud from a distance. When feeding in these vast flocks they appear to roll over the grassveld with birds at the back of the flock continually flying over those in front. They feed primarily on wild grass seeds but when these are not available, they feed on cereal seed crops such as sorghum, wheat, millet, etc. They also feed on insects. The Queleas distribution is restricted by the availability of food and of standing water as they need to drink at least twice a day.

Another quelea, the Red-headed Quelea is occasionally recorded in the Ambers during the summer months and several small breeding colonies were found early in 2017. This species may however be overlooked amongst the flocks of Red-billed Quelea in non-breeding plumage.