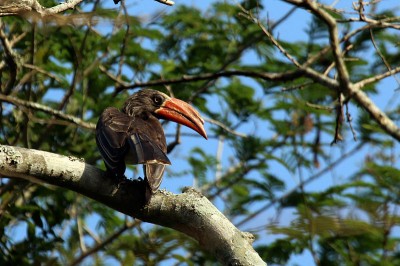 Summer is on the way and the days are getting longer. The first Yellow-billed Kite of the season arrived in the Ambers on 2 August and by the middle of the month are to be seen and heard around daily. The first White-throated Swallow was recorded near the Auditorium on 19 August. The weavers are busy establishing their breeding colonies though there is not much grass available for nest building!

During the past few months several unusual birds have been recorded for the Ambers. In this article the occurrence of some of these interesting species is discussed.

A Little Sparrowhawk was recorded in Amber Ridge during June which caused an exodus of all the small seedeaters when it landed in a tree. The highlight of one of the bird walks in the Amber Valley Game Area was an excellent sighting of this sparrowhawk. The Little Sparrowhawk is probably much more regular in the Ambers than the records suggest as it is easily overlooked.

Two African Marsh Harrier were recorded over the grasslands of Amber Lee / Dry Mountain during July. This is the only record of this species this year. It is a species which only makes an occasional appearance in the Ambers.

The Black-winged Lapwing is occasionally recorded at night flying over the Ambers. During 2019 it has been recorded in three months, the latest in July. This was unusual at it was a mid-morning observation.

The Purple-crested Turaco wanders occasionally into the Ambers from the uMngeni Valley. In August it was observed during one of the weekly bird walks in Amber Lee. Most of the records over the years have been in Amber Lee but it has also been recorded in Pigeon Valley.

The Crowned Hornbill is a rare visitor to the Ambers from the uMngeni Valley. It was first recorded in the Ambers as recently as 2015 with another two sightings in 2016. This year the species has been recorded twice – in June and August.

The Crested Barbet is an uncommon species in the Ambers, unlike its cousin the Black-collared Barbet which is recorded daily in the Game Areas; and over the past year has become a regular species in all areas of the Greater Ambers and even breeds in some areas. The Crested Barbet is usually recorded in several months of the year, mostly in Amber Lee, but this year it has only been recorded once in August.

The Olive Woodpecker was first recorded as a window casualty in Amber Ridge in April 2017. In May this year on one of the weekly bird walks we had several fantastic views of a male in the Amber Valley Game Area before it moved off over the fence into Amber Lee.

The Bar-throated Apalis was first recorded for the Ambers in August 2017and again in August 2018. This year the species has been recorded regularly from February through July. It is difficult to explain why this species has not been recorded regularly in the past as it is described as Fairly Common for the uMngeni Valley. We will continue to monitor its occurrence in the coming months.

The Golden-breasted Bunting was added to the Ambers Bird List in 2012 and recorded again in 2013. On a weekly bird walk in June this year we observed a bird in the Amber Valley Game Area; this is only the third record of the species. It is difficult to explain why it is uncommon in the Ambers as it is recorded as Fairly Common for the uMngeni Valley. An exciting record for the Ambers and a species to watch out for.